Less is More--Looking Back and Looking Forward

Happy New Year's Eve!
How was your Christmas?
We had a lovely week here, and I'm blown away at how fast Christmas break is flying by.
I will not talk about going back to school.
I will talk about words for the year.

Last year, I didn't pick a word.
If I picked one now for 2013, it might be waiting.
Waiting for change I knew somehow was coming.
Poised on the edge of something--something (or many things) I still can't name exactly except that I know they are there. 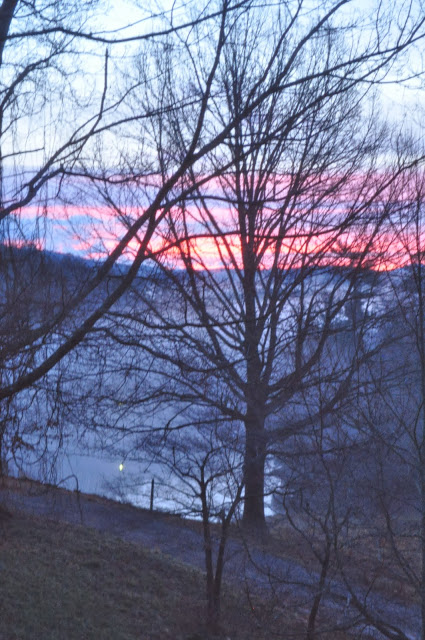 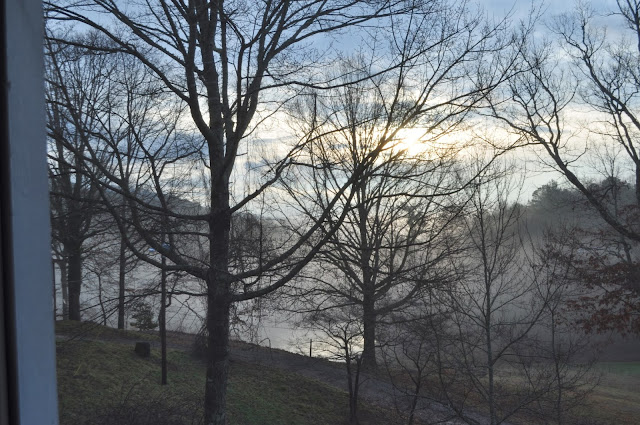 Yet, for this year, in record time and with no discussion, God gave me a word.
Less.

The God of Abundance gave me the word less and made me excited about it.

It will, as words always do, mean something else by the end of the year than I am thinking it means now.

Less is an open door to more of what really matters.
This is a lessoning so that abundance can come.

I had some posts all planned...deep thoughts on grace given through the holidays, the love-hate relationship some of us have with December, etc, etc,
but then the flu hit, and that's all she wrote.
So today, I'll just share a song that's been on repeat at my house even though it's not a Christmas song per se.
It is the message of Christmas, however;
because Christ came, there is grace enough for the Lord to cover my sin, call me daughter, wrap me in His endless wonder.
Grace enough to give up a throne for a manger.
Grace enough to die on a cross.
Grace enough to satisfy both righteous wrath and righteous love.
Merry Christmas.
Posted by Ginger at 4:43 AM 2 comments:

In his book Stories of Christmas Carols, Ernest Emurian writes of the obscure origins of the word "noel".  There is apparently much scholarly debate about Latin root words, but the most likely story rests in the English propensity to abbreviate phrases.
For example, "Good be with you" condensed to "goodbye", "fare thee well", "farewell".
So  it is highly possible that lazy tongues also produced the word "nowell" from an old Christmas morning greeting, "Now all is well."
Now all is well.
In a world run rampant with troubles, a Savior has been born!
Now all is well!
Except
all is not well.
Or so it seems in circumstances.
Ugly divorces, pressure from every direction, disease that robs young and old.
The general unloveliness of people.
All, indeed, is not well.
If my eyes are focused on my surroundings, I risk living, as Anne Voskamp writes, as though Christmas is a myth.
I risk living joyless, hopeless.
Part of the problem, I think, is that even we who profess Christ have made Christmas about us.
In one way, of course, it was about us.
Christ came to earth, our Emmanuel, to rescue His people, those on whom His favor rests.
Yet we miss the first part of the story that says, "Glory to God in the Highest!"
The great and glorious and highest God has made this thing happen-- 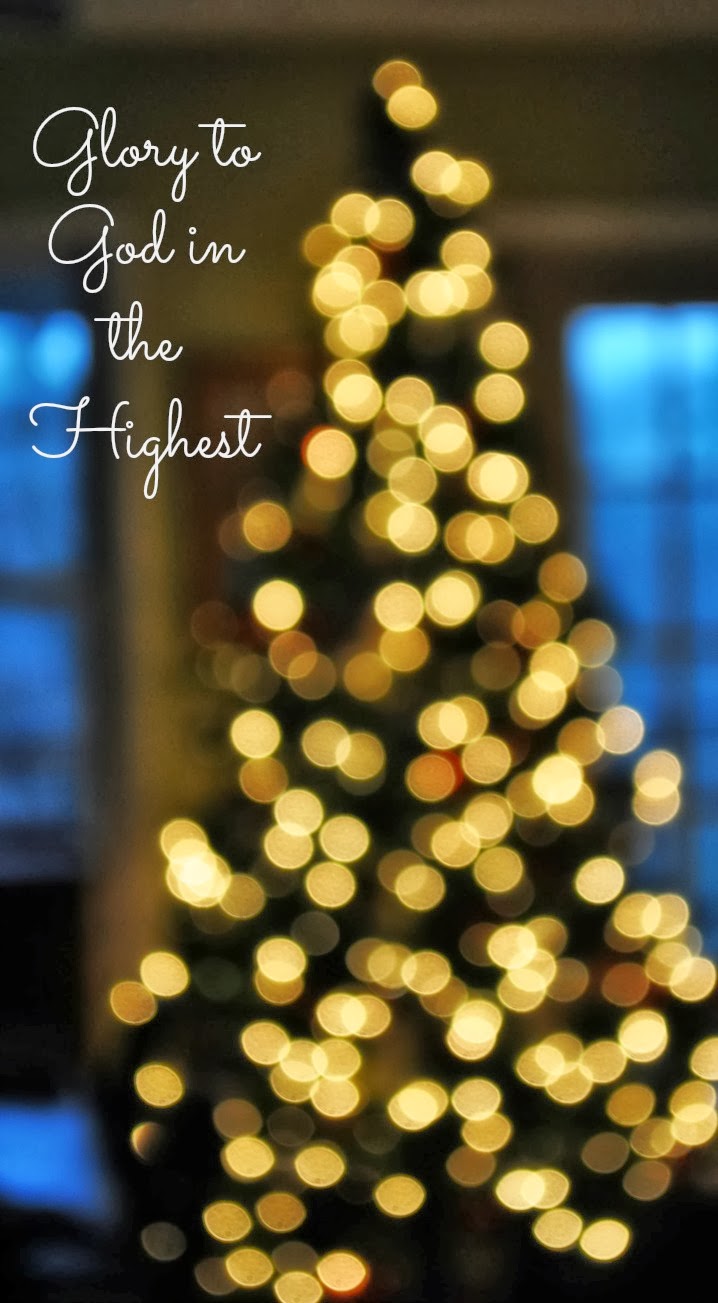 He is mighty to save,
loving in all His ways,
the Redeemer and Rescuer of His people.
The Hero of the story is not the princess in the tower;
it's the Prince of Peace.
He's here.
Now all is well.
He's coming again.
And all will be well.
Following,
Ginger
Linking here and here and here.
Posted by Ginger at 7:35 AM 8 comments:

Labels: Christmas, scripture and a snapshot, the Word, trusting

Quilting purists, avert your eyes.
I chopped up a quilt.
In my defense, it saved a quilt from near disintergration; had it been in terrifc shape I wouldn't have done it.
As it is, one pitiful quilt is now several heirlooms--and that's good!
We think this quilt was made by my great grandmother.
The pattern is "Drunkard's Path", but my mother--who was a quilter--and picky about this sort of thing--says that the pattern wasn't put together correctly.
I haven't a clue.
I loved that quilt, though, and it's been on my couch for quite a few years.
A while back, however, I noticed that age was leaving it close to tatters in spot, and it needed to be salvaged before it came completely apart.
Answer: Christmas stocking for all the great-great grandkids.
(And the long-suffering, would-be seamstress, but I digress.)
Stockings are an easy-peasy project for non-sewing sewers such as myself.
Trace a pattern,
cut it out.
Right sides together.
Add a hanger from bias tape.
Ta-da! 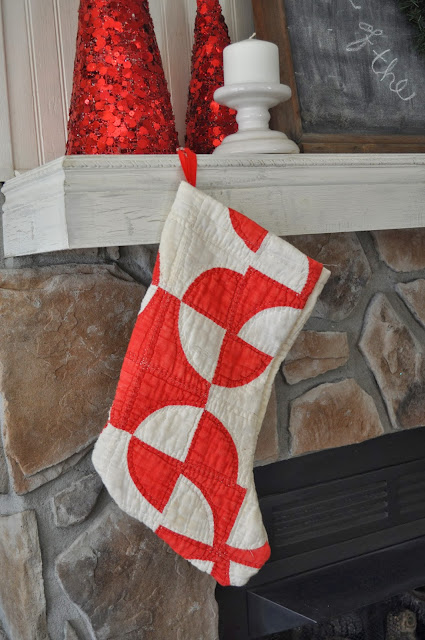 New, old heirlooms.
For the record, OCD daughter who detests all change with a purple passion
loves having the stocking but does not want us to use them
because they are not the old ones we've always used.
Sigh.
Since she is a senior, she gets her way.
What are some of your must-use decorations?
Anything new?
Following,
Ginger

Labels: Christmas, I want to be crafty

Popping in briefly today--
home with my annual chest cold and laryngitis
(and probably back at school tomorrow with said problem if no subs materialize soon.
Pain in the patootie.)
Between tea and naps, I thought I'd share our simple but sweet mantel. 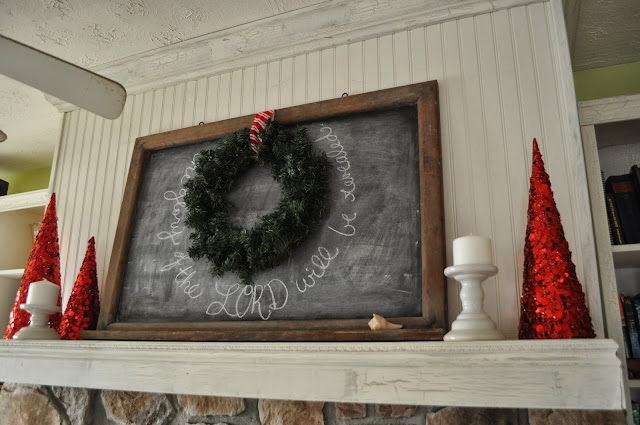 It got a few lights to make it twinkle at night. 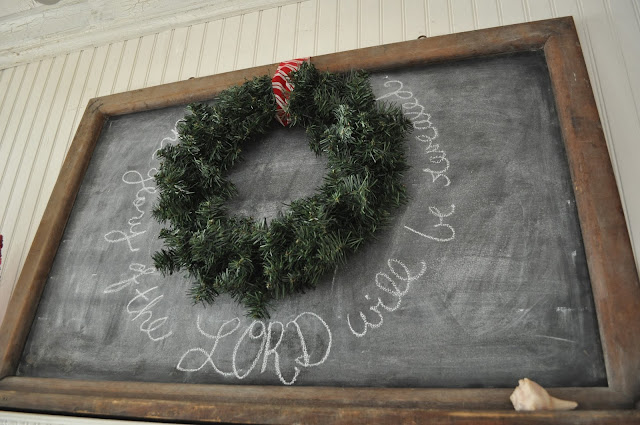 In Isaiah,
the glory of the LORD was a future promise.
In the gospels,
it became the promised reality.
Today,
it is past, present, and future.
The glory revealed
in the manger
on the cross
in the empty tomb
will be revealed in my today,
and we await His coming again
when all will see
the glory of the LORD revealed.

Labels: Christmas, I want to be crafty, the Word, today

'Tis the season to copy great ideas!
The Christmas decorating here is simple.
And done.
That last part is key.
There are a few new things in the mix, and I'm sharing one of them today, our version of the copycat Anthropologie yarn wreath.
One tutorial and about 5 rolls of yarn later,
and here it is: 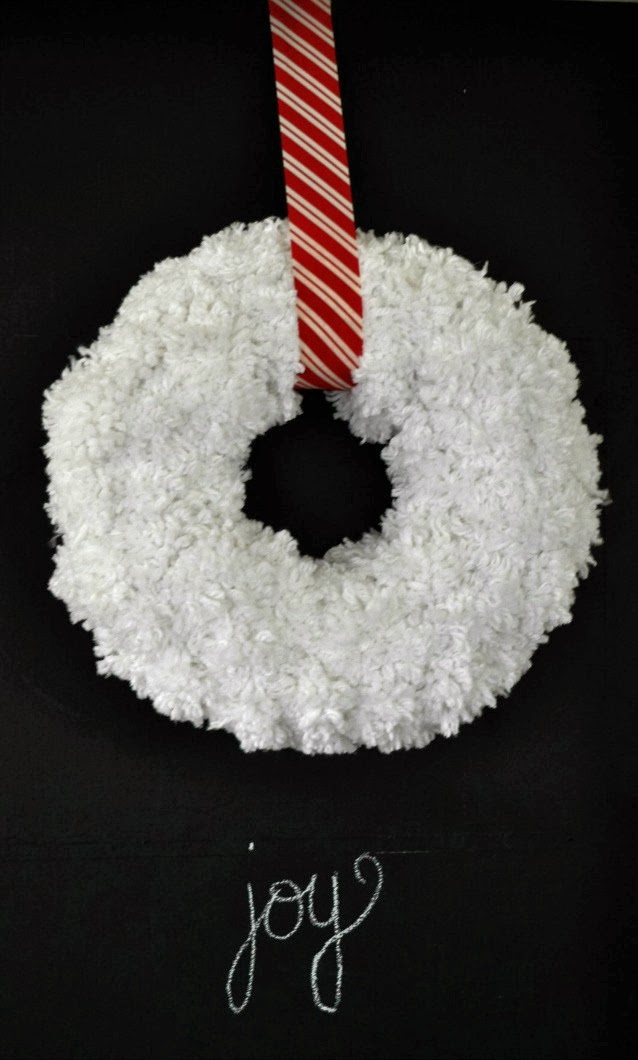 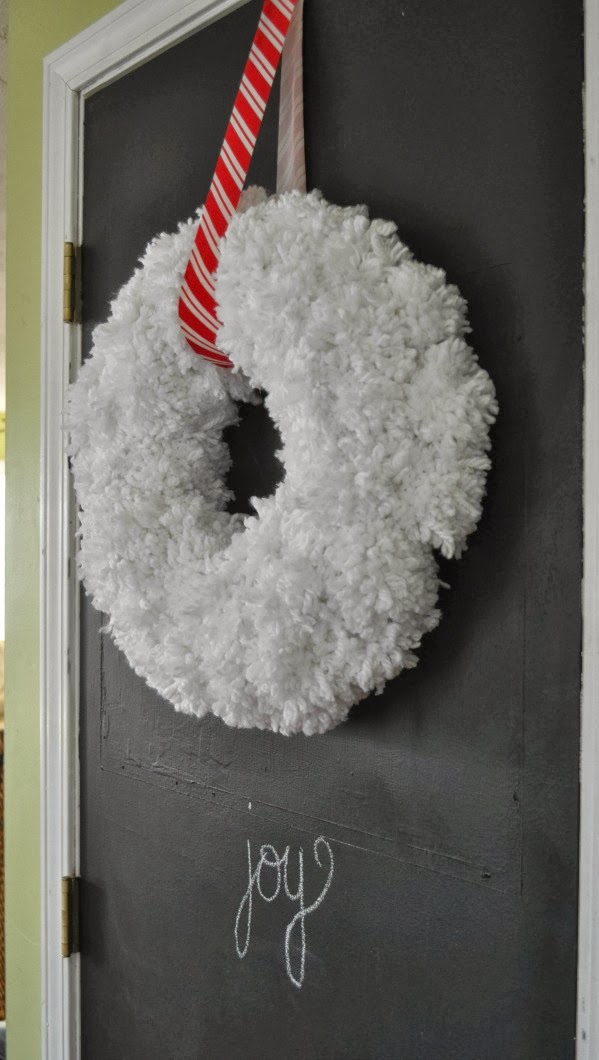 Labels: I want to be crafty

It's a yucky weather day in the neighborhood, but the soup pot's on and so are the Christmas tree lights! 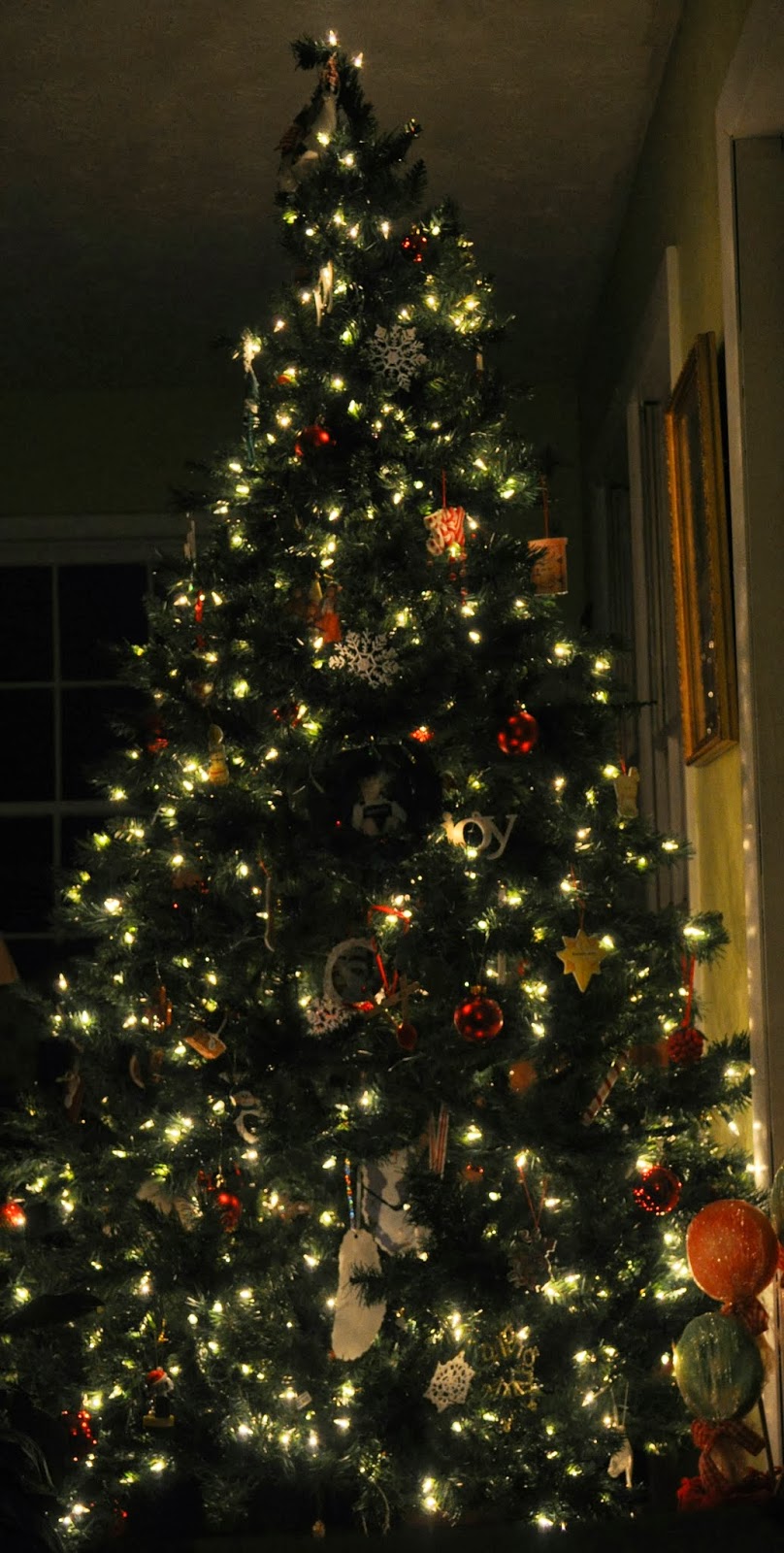 It's time to keep counting:
105. sun through my window this weekend
106. the shadow of bird wings across the porch
107. the smell of mustard and rosemary on a roasting turkey
108. cinnamon and cardamon
109. and nutmeg
110. bare tree limbs
111. my mother's voice on the phone
112. knowing my sister is one of my best friends
113. knowing my niece missed my rolls on Thanksgiving
114. a plan for the Christmas mantel
115. Christmas music
116. seeing DD#2 develop as a writer who makes me cry
117. students who were really, really good on this first day back after break
118. soup in the crock pot
119. simple Christmas decorations
120. ornaments with a story to tell
121. visiting a church Sunday and not crying through the service--a change from the last two weeks!
122. a good word from the Word
123. a new phone
124. Christmas shopping done!
125. Advent devotionals
126. time to be creative